Solved One of your object libraries (|) is missing or damaged” error when you open files in Word or Excel Opening Microsoft Excel file after successful installation of Microsoft...
by Durga Charan Ojha December 25, 2017 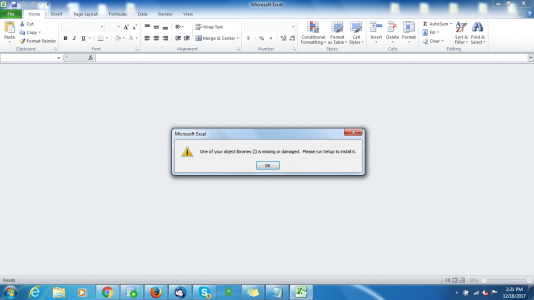 I tried reinstalling Microsoft Office but still I could get the same error while opening any of word, excel file …

by getting in to the 64bit installer for Microsoft Office. which solved the problem. I could now able to open word,excel

and successfully applied the license key.

As the windows OS (windows 7) 64 bit and some of the components like Visual C++ already installed in the machine.

and while I was trying to install Microsoft Office, it some how was installing 32 bit which was not matching with the

previously installed Visual C++ so it was showing error, which could fixed by installing 64 bit Microsoft Office.

“Io exception: The Network Adapter could not establish the connection” in oracle sql developer

How to truncate a SQL Server Data file

How to Backup a Database using SQL Management Studio

I am a proud Indian, proud father, a blogger, Being in a profession as System administrator, my passion is troubleshooting computer issues, I do like sharing solutions through blogging making videos of solving issues.
3 Comments on this post.